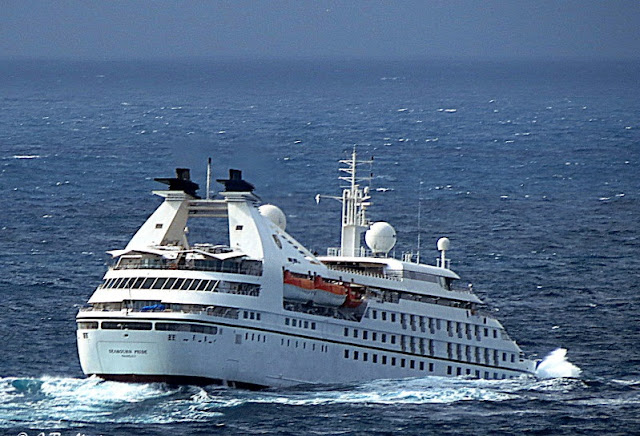 I have over the years been asked so many times about how it is to work on a cruise ship when bad weather sets in. Well, as I always would reply, it kind of depends of the ship’s size and how bad the weather is. But regardless of this we will of course notice the weather one way or another. It might only be some slight roll (side to side), or slow pitching (up and down with the bow), which normally would make crew and passenger just become a bit sleepy.
Or, on the other side of the scale, we can experience the most brutal movements, which can in in worst case make people lose balance and fall, if they don’t hold on to something. The latter can of course make some of our passengers and maybe a few crewmembers a bit nervous. One thing is for sure, if we experience very bad weather, it will affect all crew in one way or another, as well as the passengers of course. So when the really bad weather sets in, and lots of people on-board get sick, both Passengers and Crew members. The ship can sometimes in bad weather look like a ghost ship with hardly anyone around. 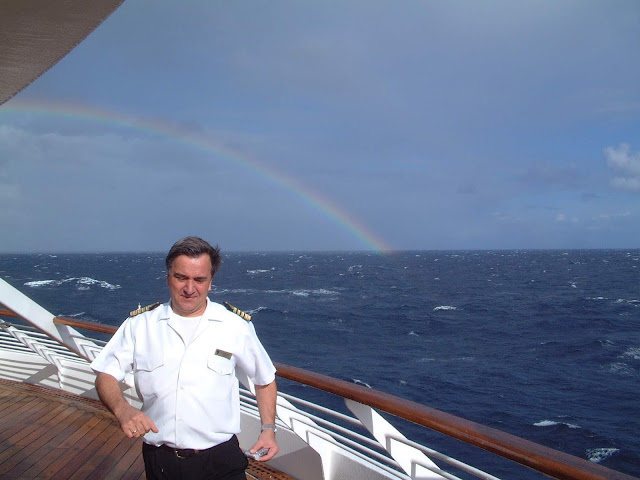 Many people will experience some sort of nausea, and some will be so sick they throw up a lot and feel drained for all the energy in their bodies. Because it is normally a long time since last time the ship experienced really bad weather, since we always try to operate in areas where the prevailing weather is good for cruising. So bad weather will naturally affect the level of service the crew can provide for the passengers since less crew members will be on duty, and the ones who are on duty will be less effective.
Luckily, the vast majority (if not all) of the passengers will have an understanding of why service slows down, as well as the efficiency among the crew. But nevertheless, the show must go on and the crew know this. And many crew members do their tasks despite not feeling too well, since they do not want to be an extra burden for their colleagues who might have to do extra work in order to fill in for you if you are sick. We all have experienced how it is when some of our colleagues are sick and the rest of us must cover their duties. And when this happens, we older and more experienced crew members will offer advice to our newest colleagues in regards to how to reduce the risk of getting sea-sick, and how to get over it. 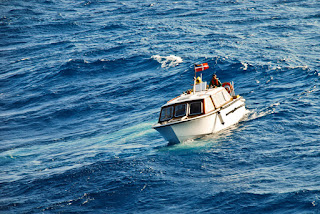 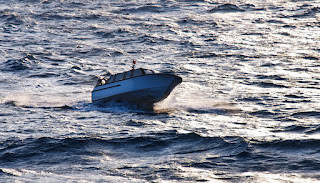 We had to quickly re positioning from an anchorage once, our tender-boats followed.

Remember back, when working on a smaller size cruise ship and the weather was not the best, the Room Stewards and Stewardesses who were supposed to take care of the passenger cabins twice a day would stand in the passenger corridors for ages, staring at those Do Not Disturb signs. Hoping the passengers would leave their cabins so they could take care of them.
This could be a nightmarish exercise for the staff, since many of the passengers never leave their cabins during bad weather, or at least wait as long as possible hoping for improvement in the weather. So the brave crew stood there waiting and waiting, sometimes for hours, like loyal soldiers, some of them ash grey in their faces. Impressive stuff boys and girls. My hat off for you brilliant colleagues. 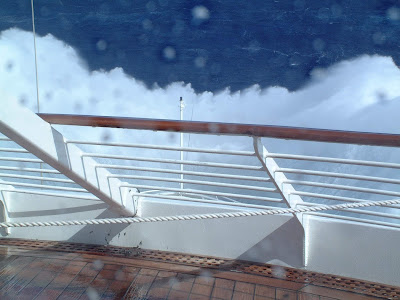 
Sometimes we can experience such brutal weather, we just have to ride it out by heading up against the waves with as little speed as possible, just enough to steer the ship until the weather starts to improve, or we have passed the area affected. This can take hours and and in some cases days, and is an extremely tiring period for all on-board the ship. Especially the watch keeping personnel, because they normally have shorter periods of sleep than rest of the crew, and need to be on duty again at set times. So if they struggle to sleep when off duty, they will sooner or later start to experience some fatigue. 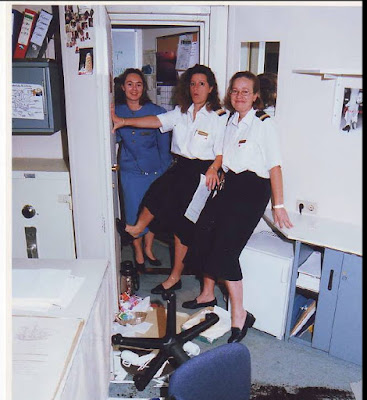 Pursers riding the storm out. Still in good mood.


Story time - Here is one little story I don't forget.
We had finished the summer season in Europe, and the so called re-positioning cruise started out from London, and would end in Boston. We would call one of the British channel cities, then on to Ireland (Cork or Cobh), then up to the Orkney's, Iceland, Greenland, Newfoundland (Canada), and towards Boston. In other words, we would do a North Atlantic crossing during the autumn. And we always hated this crossing, because it would be rough. We knew that.
As soon as we left Ireland and heading north, the weather started to become bad and it didn't take long before we had to slow down in order not to slam into the big waves. A storm had started to develop moving eastwards towards the Orkney's and Norway, and this was in our planned course line. So we slowed down to make it less uncomfortable for the people on-board, to avoid damages to the ship, and to give the storm center time to move away from us. But we could not avoid it totally, since these systems normally stretches over many miles. We just had to limit the effect it had on us. 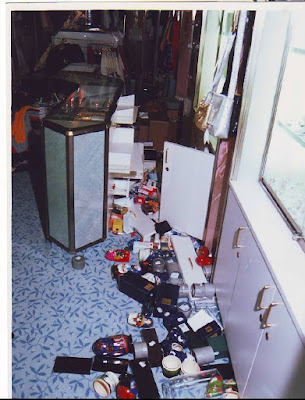 Time to close the shop on-board. 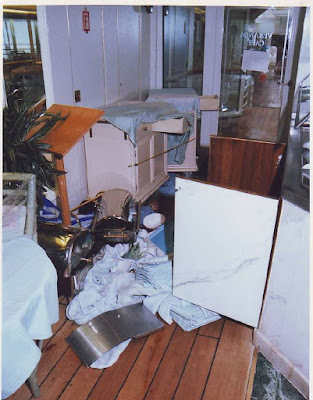 Sorry, this restaurant is closed.

I was the 4-8 (16-20) watch-keeper on the Bridge back then. It was pitch dark outside, it was pouring down with rain, and the wind was really making a lot of noise. Each time the ship's bow slammed into the waves the entire ship shook with a shock wave being sent through the entire ship. You had this feeling the ship was in the air for just a split second just before it hit the waves. And a second after it hit a wave, lots of sea spray hit the bridge windows. And every time we got ready to get down in case the windows got pushed inn. Something which had happened some years earlier (I was not on-board then).
Nobody said a single work on the Bridge. I stared at the radar screen all the time, and the two (double) look outs were staring intensely out the windows and into the dark to see if they spotted any lights from smaller boats I could not pick upon the radar. This went on for almost two hours. Very tiring for all of us to try to see something in the dark, which is not there. 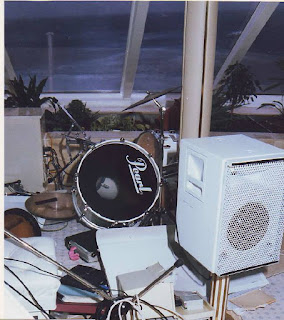 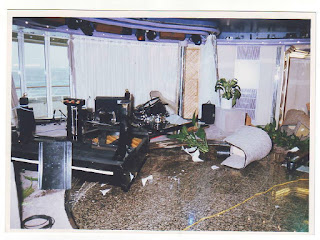 Needless to say, the show was cancelled.

The the door to the Bridge was opened, and in came the Captain (Captain Leif Rodahl), he had given up sleeping. He went over to the table were we kept the weather faxes received the last hours. No internet those days, so the weather information came on special weather fax machines which monitored certain frequencies. The Captain stood there reading the faxes and calculated how long before we had passed this storm center, before he moved over to where I stood in front of the second radar on the Bridge. No words except for a "Good morning" were exchanged. And we stood there both looking at our radar screens in silence and sometimes making ready to get down when the sea spray hit the bridge windows. This went on for another hour or so. 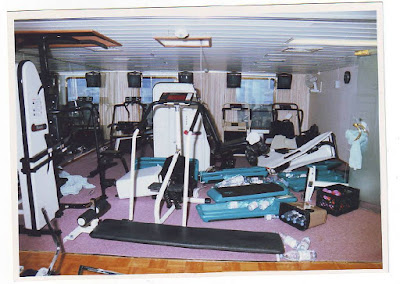 I skipped the gym.

We finally started to have some daylight, which meant we soon would be able to see out the windows again. So we started to see the waves more clearly now, and we could observe these huge heavy waves building up and towering in front of the ship, before they would break over the ship's bow. We all just stared out the windows now almost as hypnotized, just watching the brutal side of nature treating us as we were onboard a paper-boat. Still, nothing was said, we all just watched it in silence.

And then suddenly someone broke the silence, it was the Captain, and he said exactly what we all had been thinking......"I kind of wish it was still dark outside". And my reaction? I started to laugh almost hysterical. We all laughed out loud on the Bridge, including the Captain as he just realized how funny it actually was. It was like we all needed this outburst, a release of tension.

A few more hours and we had finally passed the storm, and the crew (still sick) could start the clean up procedure throughout the ship. And one lessons learned was of course....... (look at the pictures), make ready for sea next time.
😄😄😄 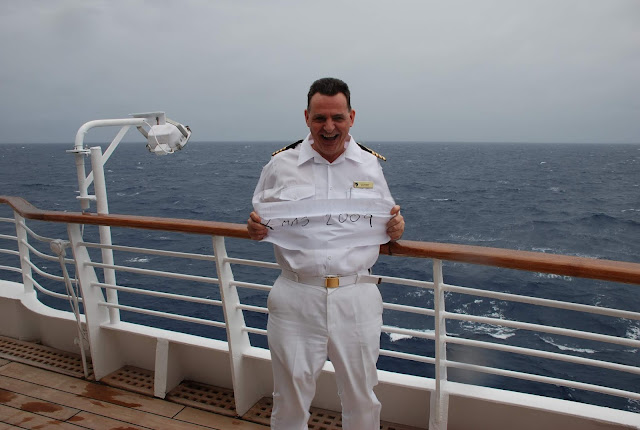 An attempt to make a X-mas picture before bad weather sets in.