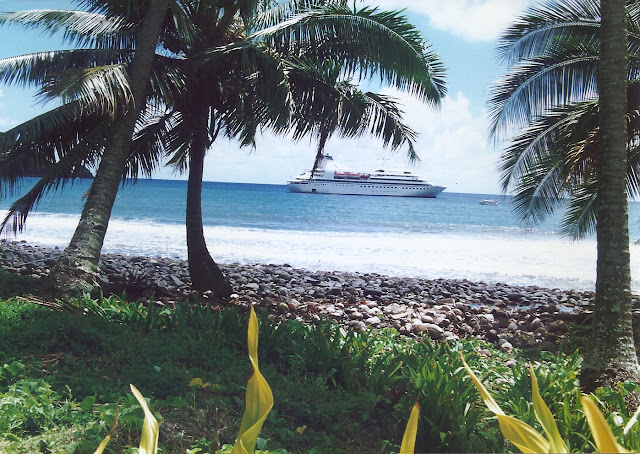 The South Pacific and other tropical areas created some memories I will cherish for the rest of my life. Of course this was not only fun and games, because in the end of the day we were there to work and provide a service for the passengers.
Let's have a look at some pictures. 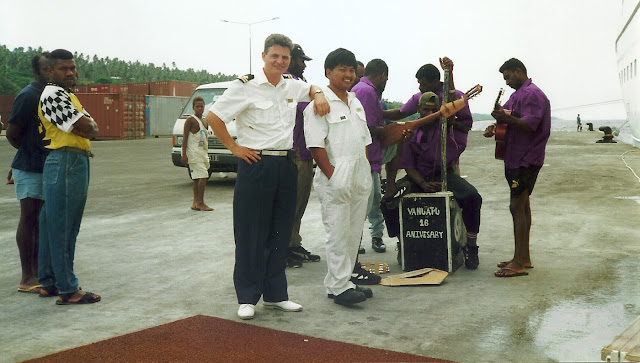 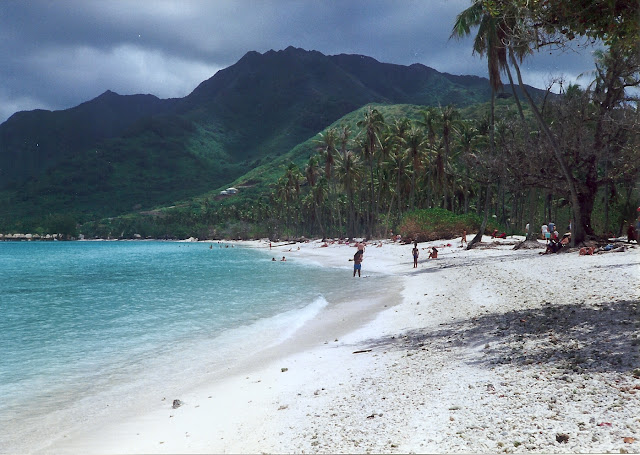 Normally we would be at anchor somewhere, and shuttle the Pax (passengers, or guests) and Crew to a smaller pier, to get them on the island. Sometimes we were lucky and could go alongside with the ship, but that could become a real a struggle since we needed an "overhang" with the ship, which means only part of the ship would be alongside with an anchor out and mooring lines to some bollard on the beach. 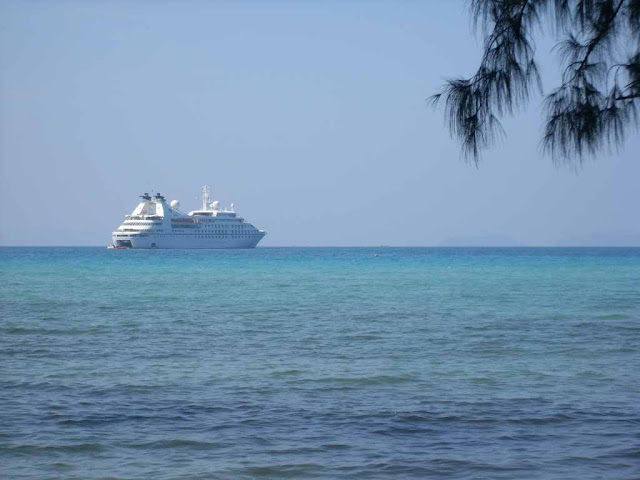 At anchor in the bay or off the beach, in safe water. 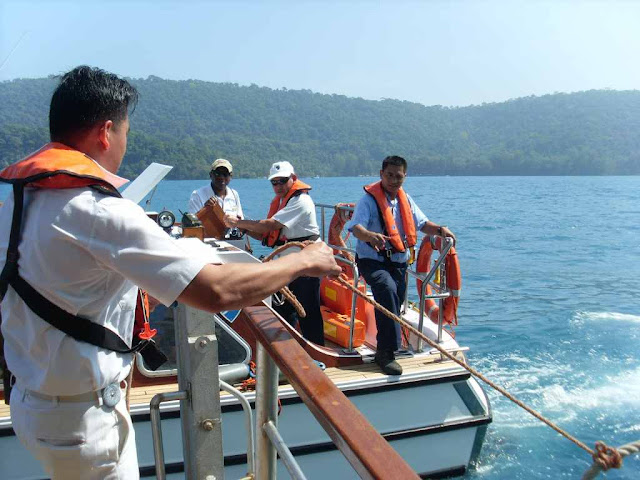 Crew prepare Tender Boats for transportation of Pax and Crew to shore.

The activities on the beach would sometimes be a full beach B-B-Q, where the crew worked extremely hard the entire day bringing everything ashore.
Sometimes it would be watersports activities from the beach, which was also a stressful day for the crew. And sometimes just regular tender service (shuttle traffic) for the Pax and Crew who wanted to go ashore.
Let's scroll down. 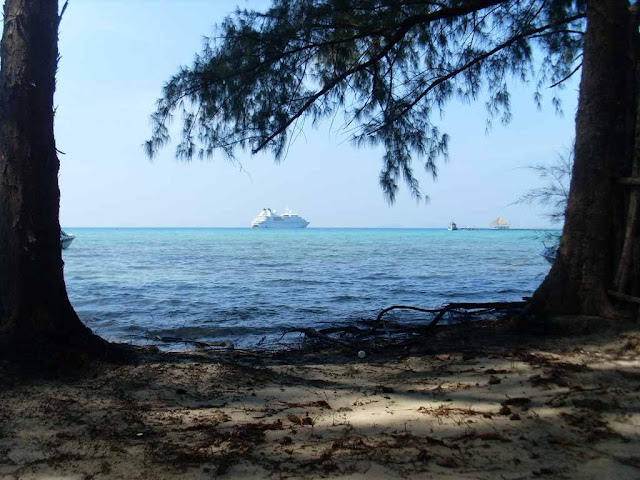 In a safe distance. 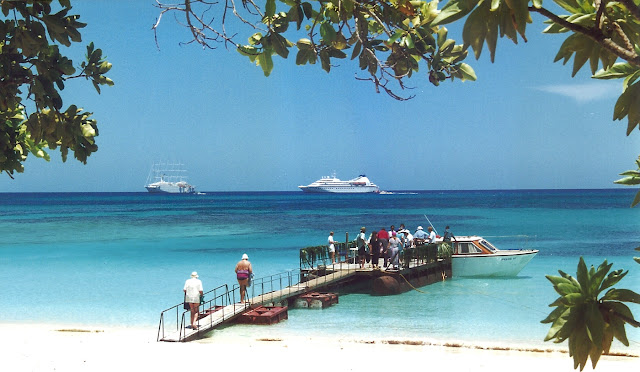 Fiji islands. Tender shuttle to a temporary made pier on the Beach. 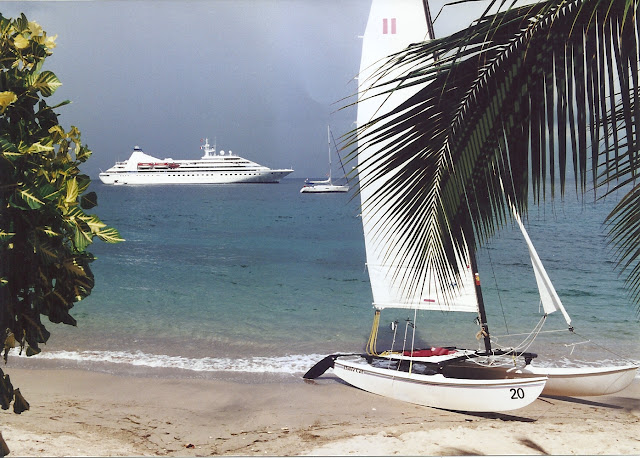 Fiji Islands. Can not get more tropical than this, can it? 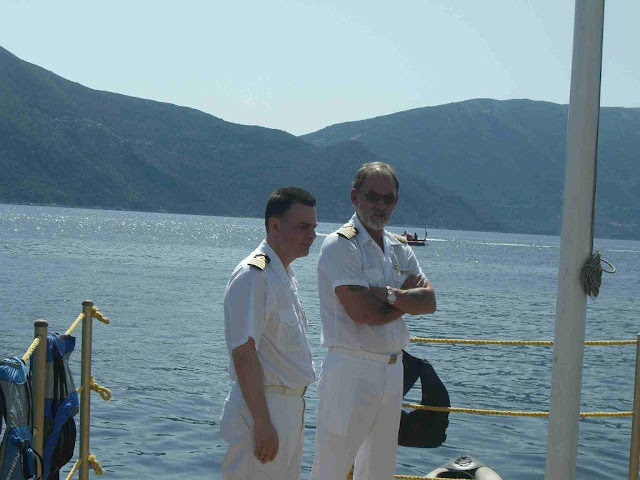 Around year 2000-02. Always wondered what the Captain and I was concerned about there. 😁


Sometimes we had to do something we called a "wet landing". This was unfortunately not for the more old and fragile, because it included having to climb out of a Zodiac (or a RIB), in order to wade in the water towards the beach. Reason is simple, not enough water depth to bring the ship or the tender boats close enough to disembark people.
I still remember how this could be a very stressful operation. Just look at the pics below, with me in a zodiac. Getting assistance by many of the locals. 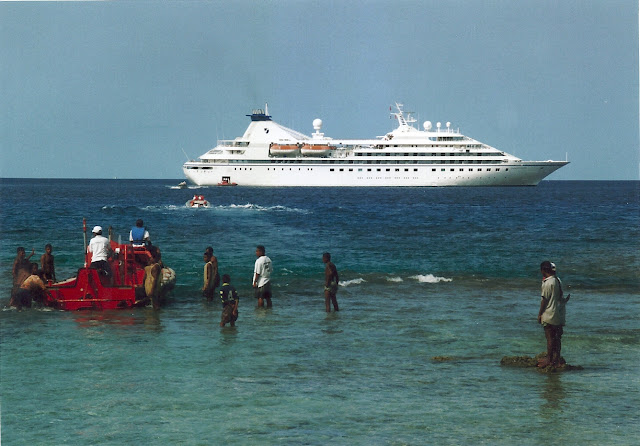 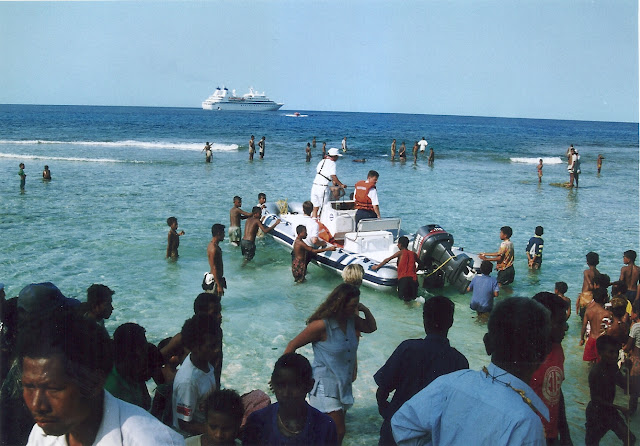 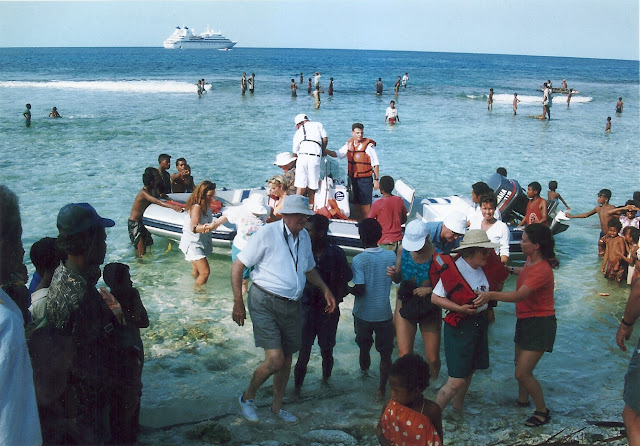 Have a wonderful day. 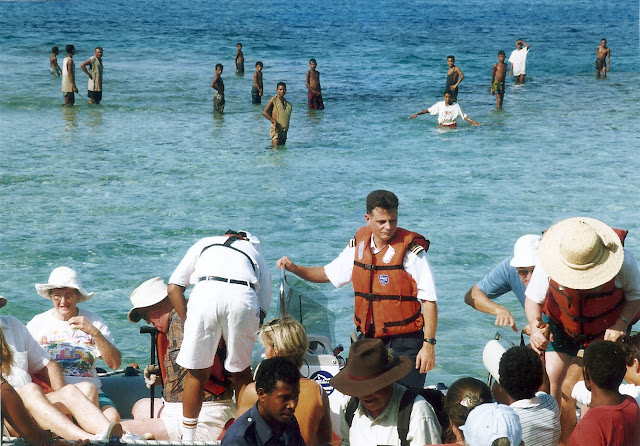 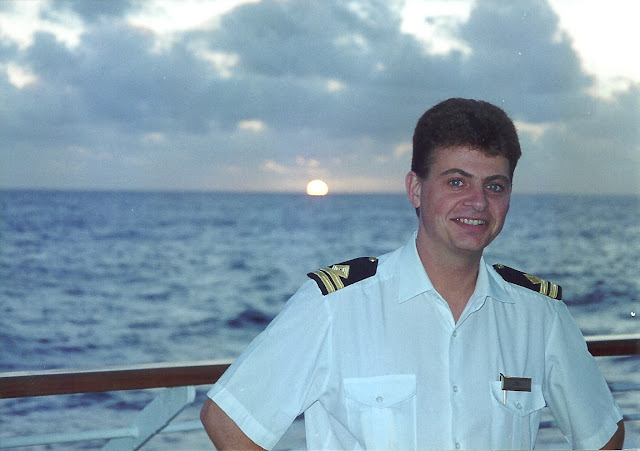 Young and slim, cruising the world.


Oh yess, good times indeed. So happy I was able to experience this before the total commercialization started within the travel industry.
Thinking back, and watching these pictures, the stress will normally disappear and we keep the good stuff in our memories.
I consider myself very lucky.
😃

Careful about what you carry, and where. 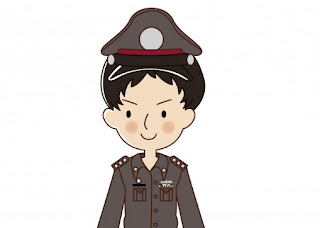 Back in the 2000s when I lived in Chatujak area in Bangkok, I sometimes went bar-hopping with a friend of mine who was working at the local Police station.  We normally took the taxi downtown to the lower Sukhumvit area.

We tried a couple of times to look at some of the girly bars in Soi Cowboy and Nana Plaza, since he was of course curious about those bars. He never went to them himself because he could not afford the prices. He never understood why someone wanted pay 150+ baht for a small bottle of beer.

Most of the bars denied his entry, purely because he was Thai. I didn't understand this, but I didn't argue in the doors as there were so many other bars anyway. I asked him why this was, and he told me because of two reasons. Firstly the girls inside would sometimes be very shy and  embarrassed when local males showed up. And secondly some did a "runner" from the bills when drunk. So to avoid any of these issues they just denied all hetero Thai males. Interestingly enough he was never upset about this. I guess he kind of understood.

Anyhow, I noticed he was always wearing this Bum Bag (or Fanny Pack) when we were out. Never left his small studio apartment without it. This was not a problem for me, so I never really made any comments about it. I sometimes thought it was little strange that he had chosen a pink colored bag. Probably his wife's maybe. 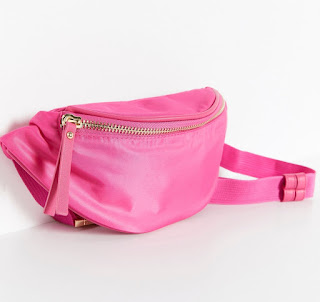 Same as my friend's.

One other thing I started to notice was the fact nobody ever talked to us when we were out. Even when we went to places with mainly Thai customers, hardly anyone stopped by our table, or chatted with us. It started to become a bit boring. So I mentioned this to my friend. He just looked at me and calmly said... I know, and I also know why. Don't you? It is because most people think we are a gay couple. I don't care, he said.
But I care, I said. Doesn't matter what people are or like, but I myself like to be placed in the correct box or category. And, as you know, I also like to flirt a little innocently with the ladies. And so do you, I know that. So can you please get rid of that Pink bag you always bring with you? And he did, almost. Except that he got himself another one with a more neutral look. Fair enough. 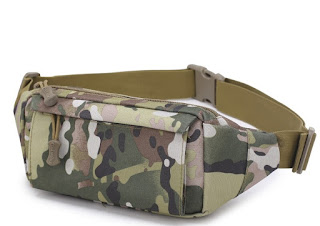 And wont you believe it, how many looked at us changed, just for this small issue. It was a very different scenario the next times we went out bar hopping, one could feel it. Again, I feel comfortable when put in the correct box or category.
Moving on, many months later we went out again, and he still carried with him that silly (new colored) bag. So this time I just had to ask him, so I knew once and for all. What is it that you are always carrying with you? What can it be in that silly Fanny Pack you drag with you everywhere that is so important to you? Lipstick and mirrors? I joked.

He looked at me clearly surprised as he thought I already knew. He opened it and showed the contents of the bag to me.  I always must carry this with me he calmly stated. 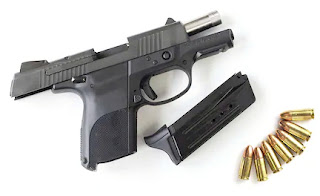 He always carried a weapon and clips.

I was speechless for a few seconds, thinking he had this with him every time we went on a piss and got seriously drunk.
You think you know your friends, and what they carry. Not always. 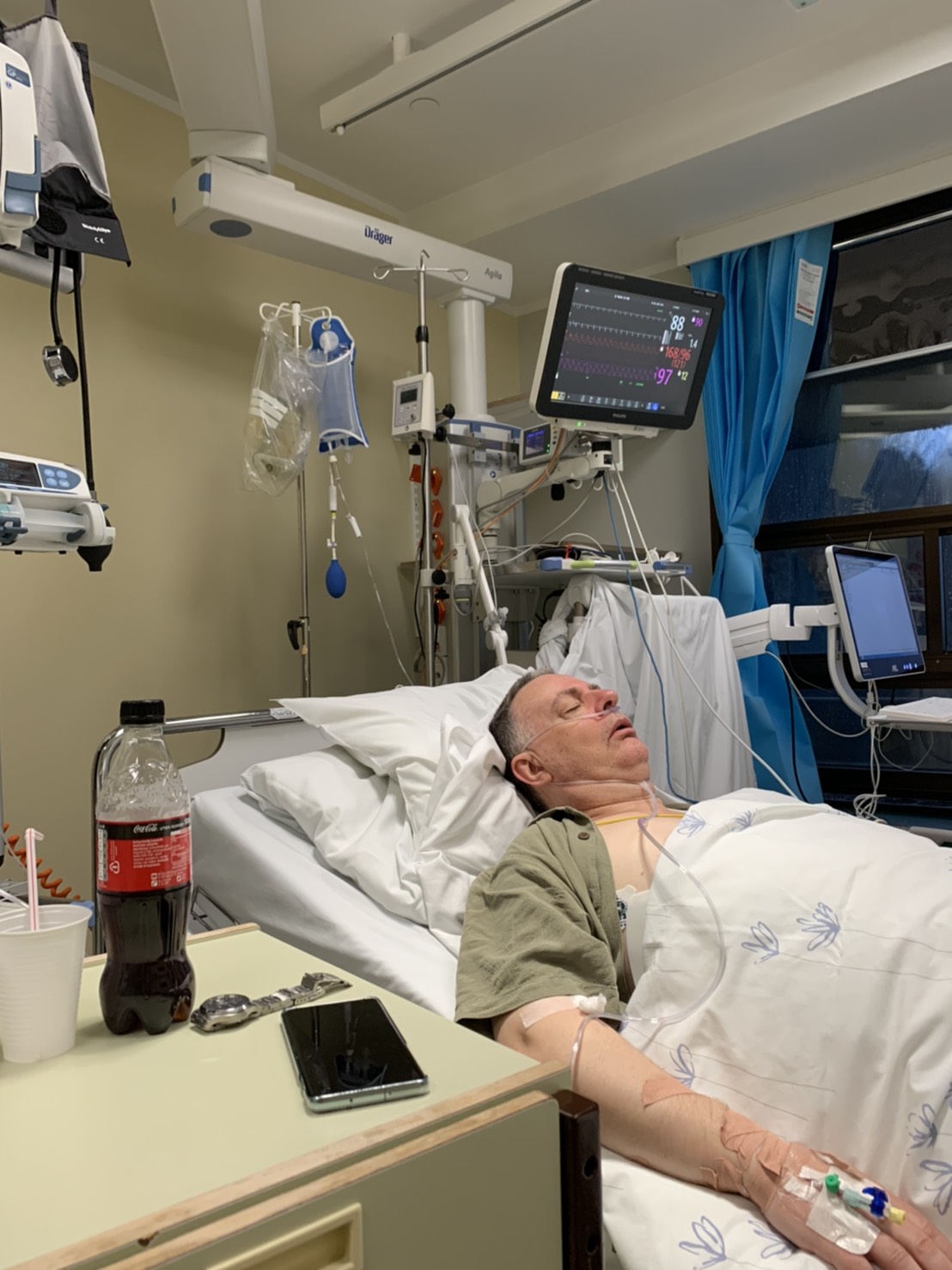