I recently suffered a Heart Attack, which when I come to think about it was no surprise at all. I am overweight, middle aged, and in no good physical shape at all. In addition to all that, I have always had a short fuse (hot temper), and I like to eat junk food. Still, getting a heart issue was always far away from my thoughts. I never thought about it at all.

So when I go it, and the ambulance personnel confirmed it, I was never any scared of dying at all.  Strange really, I just laid there trying to figure out what was going on around me. Family and friends have asked me how it was, and so on. Ok,  Let's track back a few months.

We had been visiting one of my sisters for a little party. It was myself, my two sisters and our plus ones (wife, boyfriends, etc). Lots of eating and drinking. The taxi was ordered at around 1:30 am, And I went to bed almost immediately after we came home (to my mother's place).

I woke up around 6 am I think it was, with chest pains. I felt very uncomfortable and I thought it was some indigestion since it had been a of lot eating and drinking during the previous evening. So I tried to sleep it off. But it would not go away and I started to feel more unwell, so I went to the bathroom to see if that could help. And it did not. Back to bed, and I tried several sleeping positions, still sure it was something which would pass. But it didn't

I got dressed, went to the living room and tried to stretch my body in all directions, but the pain was not going away. In fact it had increased in intensity. This was probably a good 45 minutes after I woke up. I sat down in a chair and now seriously started to wonder if I was suffering a heart attack, so I started to think of symptoms I had learned over the years in all the first aid courses, and what I had watched on the TV. And the intensity of the pain increased all the time.

Hooked up, and awake after surgery.

I guess almost 2 hours (or 90 minutes maybe) had now passed, cant remember for sure since the time was kind of not in my mind anymore. Anyway, my wife came to the living room because I was not back in bed, and she heard me moaning in the living room. I was sitting there and now I started to feel the pain in the arm, which is the sign we all have learned. So I told her to wake up my mother and tell her to call the Emergency number and let them know I most likely was having a heart attack. So she did, and after just a few questions I got confirmed the Ambulance was on its way. Luckily they had a station with Ambulances stand by very near my mother's home.

Now everything started to happen fast. The ambulance came within minutes, and they hooked me up and asked a couple of questions, since I was still awake and sat on a chair. I could walk with help to the Ambulance, and got hooked up with more stuff. I also got myself a Morphine shot (I think it was) for the pain, and that helped immediately. This was good stuff indeed. I only struggled a little bit with keeping my eyes open. I guess due to lack of sleep and the shot I was given. But I could easily listen to everything that was said in the Ambulance. It was very interesting to listen to the Doc's communication with the Hospital, so I knew all the time how many minutes we were away from it, and my own medical condition.

At the Hospital, things did not slow down. I was slid over to another bed in some sort of arrival lounge, then rolled into another room which was the operations room. Again hooked up to a lot cables. A big monitor was adjusted in such a way it was just over my face, so I couldn't see anything, but i still could listen. And listen I did. It was fascinating to be awake when they did the procedure on me. How they inserted something into my wein (from the groin area) into my heart, in order to get rid of whatever had blocked that artery. Then a new wire was inserted with something they called a Stent. Lots of technical talk, and a new shot with morphine, or whatever it was. I remember I managed to make a joke about be careful so I don't get addicted to this good stuff. A silly joke from a man in distress.

I remember at one point during the procedures, I started to get this feeling I needed to shift my position, since I had been laying in the same position for a long long time. So I got a bit restless, and started to move my feet a bit. I also told the staff I felt this urge. No, the Doctor said, very loud. Lay still! I have a wire into your heart right now, and if you don't lay still I will have to put you  under a full anesthetic. That kind of made my mind take control of my body again.  Funny, after the procedure and before I got rolled into the ICU, the Doctor apologized for being so rude and loud to me. I just smiled and said, no problem Doc, you are Boss.

And that was that. Easy fix. Speed and Service.

Ready to get home.

After some good sleep, just interrupted by all the times I had to pee, due to all the fluids they poured into me prior to the procedures, I had no pain, or felt uncomfortable at all. I could easily gotten home that same day they did the surgery. But they wanted to keep me for observation for a few days. I managed to get home a day earlier by arguing with the Doctor about me getting better sleep at home than in the noisy hospital. And he agreed about that. So home I went, to reschedule the flight from Norway to Thailand, since we actually should have been on the flight the day after the heart attack. Which could easily had happened over some undesirable country if they they had to emergency land me there.

Lessons learned. The Doctor was very upset with me since it took almost 2 hours from when I felt it until I got in the Ambulance. It should take 10 minutes max before you call, he said. Never mind if it is not life threatening, always call. Point taken Doctor.  And now, I eat a bit healthier. At least I do not eat that much junk food anymore. The medicines have helped me a lot. And I am more active (exercising) these days. I guess I live to see a few more years. 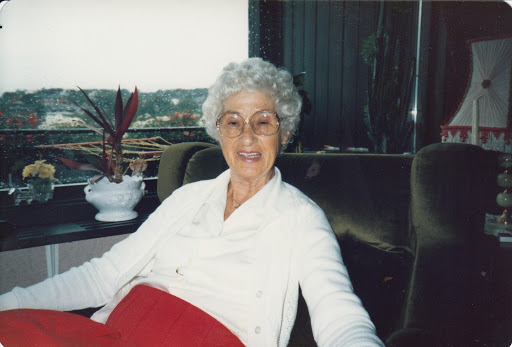 The picture of that smiling lady you see above, is of my dear Grandmother (rip). As far as I can remember, my grandmother was a very hard working women with a big heart. When thinking back to my childhood, I can not remember one single incident where she cried or was upset. Talking to my family, friends (who knew her) and relatives, absolutely none of them can remember her being angry or annoyed at anything.

Surely she had her heavy days with stuff she worried about, like the rest of us. But she never showed it to anyone. Maybe my mother and her siblings might have noticed. But talking to them, they keep saying she was a good mother, with a big heart. Her husband was out of the picture early on, so she was the one (living alone) I always visited as a kid. And sometimes I stayed overnight or a weekend, and got spoiled as grandkids are. Food and sweets, and watching television late. Good memories. 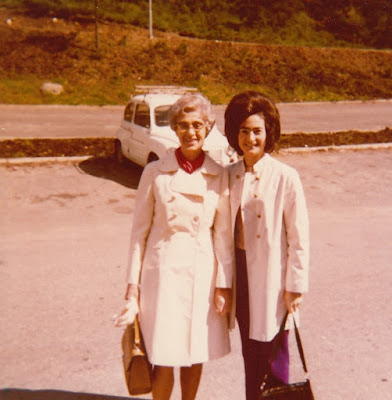 Amazingly enough, my dear grandmother also had a career at sea. Although not as long I myself. But when I heard the story, I just have to be proud of her, my cool  grandmother.
It turned out that when she was 50 years old, she decided to take another job, in order to save up money for an apartment in one of the new apartment blocks the City of Bergen (Norway) was planning to clear land for, in one of the suburbs (Fyllingsdalen). And what did she do? She became a seafarer, at the age of 50!

Yes indeed, she went to the Registration Office for seafarers to register as a sailor and obtain a "service/discharge book", before she sent out applications to the various shipping companies in town. Bergen back then was a huge shipping town, with plenty of companies, so she got herself a job with the company "Jebsen" (later named Gearbulk). This was in 1963, so the first-timers normally joined the ships when they were about 15-17 years old. But not my grandmother, she joined at almost 50! I only wish I could ask her what went through her mind when she did this. Was she nervous? Was it an absolute must, and she didn't want to do this? nevertheless, it was sporty! Sporty as hell 👍 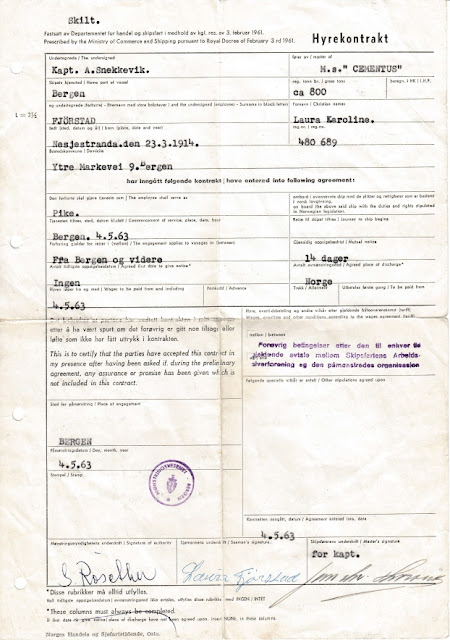 Above is a scan of my grandmother's original contract, which I am so happy we manage to find when going through her belongings after she passed. The contract is dated 4th of May 1963, and she is hired as "girl" on a brand new ship, the M.S Cementus. The position "girl" would these days probably be the equivalent to a Mess room utility. 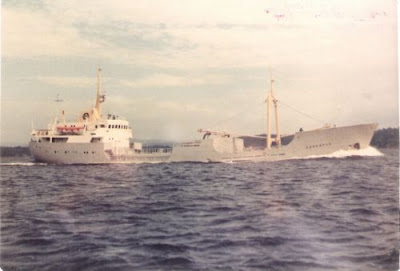 She did her contracts, working in these very unfamiliar conditions, until she had the money she needed for an apartment. Saving up what she could after she had transferred some of her salary back home for the family monthly. I can only imagine this was a slow and painful process. Surely she must have missed her family and home town.

One must understand the pride I feel after I found out about my dear grandmother's career. Especially since I also chose a career at sea. Her choice was nothing less than impressive, knowing she had to leave her family at that age, to do this job only temporarily. And it now makes so much more sense when my my mother tells me that my grandmother was extremely happy whenever she received a postcard from me, sent from all over the globe. I must have sent her 100 cards before she passed.

That is why every year on the International Women's Day March 8th, I post a little collage in honor of my cool cool grandmother. 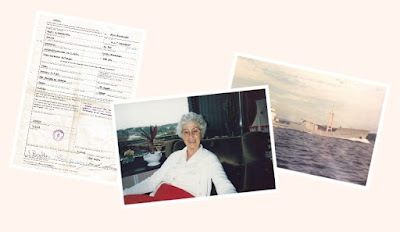